Fourleaf mare’s tail is an interesting plant species. Although it’s distribution is circumpolar (around the world), at the same time it’s very spotty. You can find it here and there in small populations but for one reason or another, it’s missing from the areas between the populations. It prefers brackish water and very shallow depth of 10–20 cm with quite soft and muddy bottom. With these requirements, one would think that there are plenty of habitats for the fourleaf mare’s tail in the Bothnian Bay.

There are many species of mare’s tails – the name means female horse’s tail, which comes from the looks of the plant, especially under water. The Finnish name “nelilehtivesikuusi” points to the woods and the spruce three, which is what the species looks above water. As the English name suggests, fourleaf mare’s tail has rows of four leaves surrounding the stem. The Swedish name of the fourleaf mare’s tail is “ishavshästsvans”.  It means the horse’s tail from the arctic or glacial sea. What’s difficult about the mare’s tails is that they seem to crossbreed easily, and the hybrids are very strong competitors and may push the original parent species near endangerment. The whole taxonomy of the mare’s tails is still very confusing, and the latest opinion is that the hybrid is so well established and common that it can be considered a species of its own. The whole genus needs more DNA testing and studying.

Fourleaf mare’s tail is endangered (EN) in Finland and protected under the Nature Conservation Decree and critically endangered (CR) in Sweden and protected by law. The species used to grow all around the coast of the Baltic Sea, but with anthropogenic eutrophication, the coastal shallows started to overgrow by common reed Phragmites australis. This was one of the reasons why the fourleaf mare’s tail has declined. At the same time, grazing of coastal meadows by cattle has decreased, and since the fourleaf mare’s tail is not a strong competitor, its populations are getting wiped out everywhere in the Baltic Sea, except one or two tiny spots in Sweden and in the Northern coast of the Finnish Bothnian Bay. In the future, the climate change may affect the fourleaf mare’s tail negatively by decreasing ice-scouring on shallow landupheaval muddy coasts which the species prefers. Ice-scouring helps keep these areas free of other vegetation, much like grazing used to do back in the 1950–1960s.

Observations of fourleaf mare’s tail in the HELCOM area (Image by HELCOM).

In the SEAmBOTH project area, the fourleaf mare’s tail can be found in large populations in the Krunnit archipelago and around Hailuoto island in Finland. There are similar habitats on the Swedish side of the study area, but for some reason the plant doesn’t exist there. In Sweden it can today only be found around Kronören, an area along the coast of Västerbotten, approximately 300 km south of the SEAmBOTH project area. Before it also used to exist at a location outside of Umeå but since about 30 years ago it disappeared from there. One theory is that the populations on the Swedish coast originate from seeds and/or plant parts that have drifted from Finland across the Gulf of Bothnia. Once arriving at the Swedish coast, they settled down where a shallow, sheltered and suitable piece of coastline was available.

The fourleaf mare’s tail is an intriguing example of an endangered species which grows in one country and not the next one, despite of, at least superficially, similar habitats and physical environmental variables in both countries. 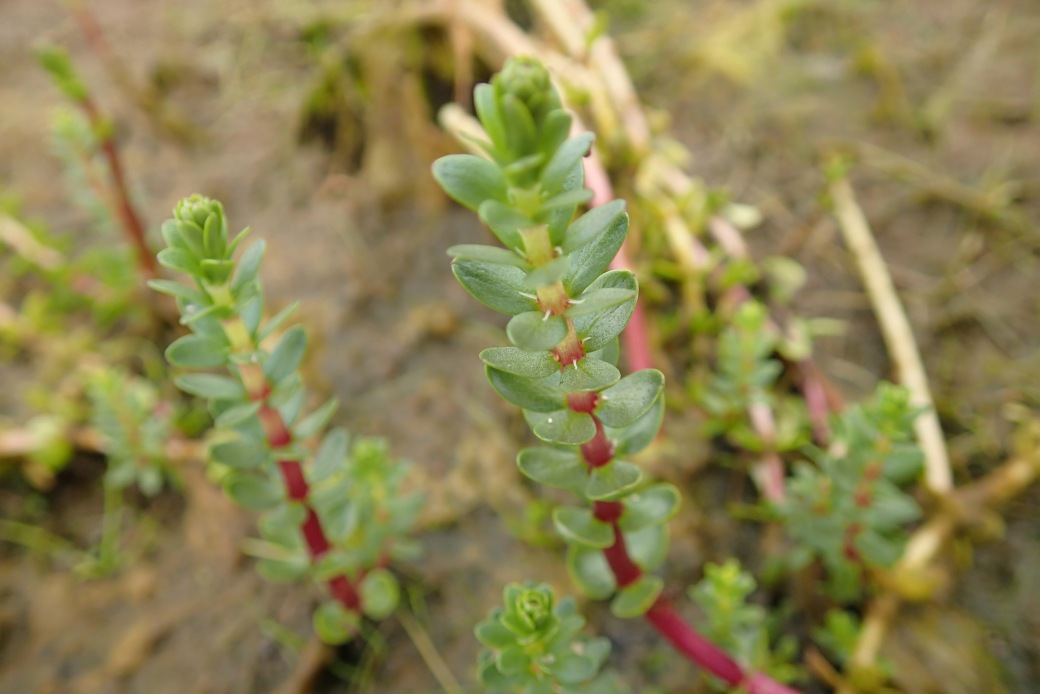